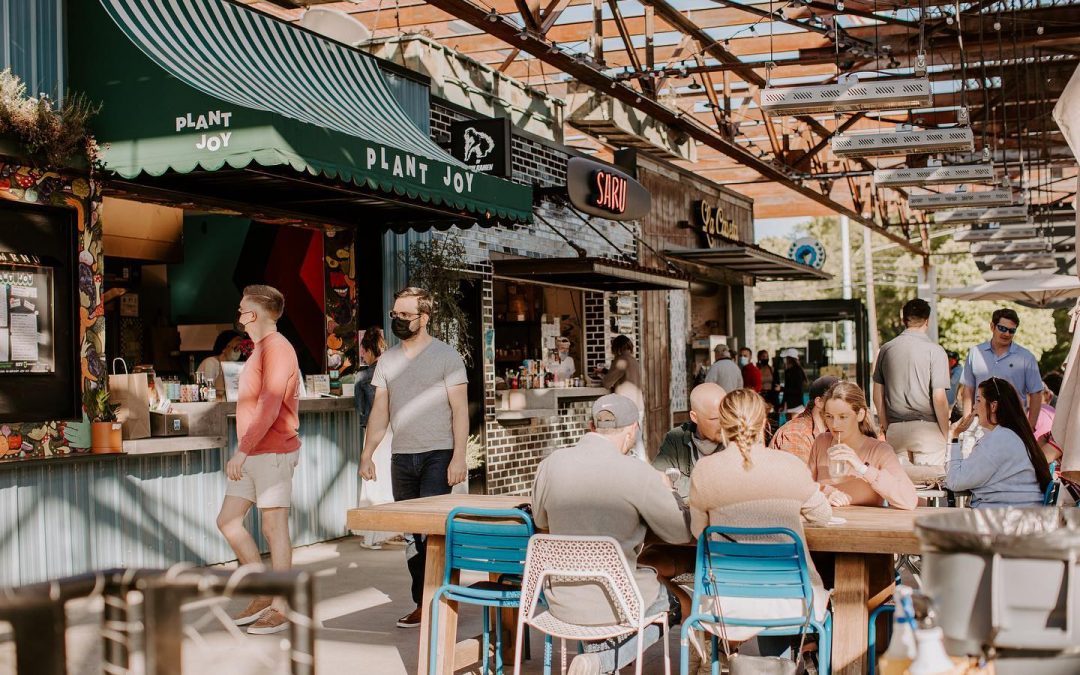 How many times have you caught yourself saying, what are we going to do this weekend? The truth is you live in a city with endless options. Charlotte has so many vibrant neighborhoods to explore on the weekends. Each one offers something unique and special. Take Camp North End.

The massive 76-acre adaptive reuse project is one of the most innovative areas of town putting its own spin on the Charlotte arts and food scene. The industrial site sits just north of Uptown between Statesville Avenue and N. Graham Street. The old warehouse buildings, once home to a Ford Model T factory and a missile plant are finding new life with a younger crowd.

Camp North End is still growing its tenant base. The popular Babe and Butcher charcuterie business which grew a huge fan base on social media recently opened its first retail location in Camp North End.

Along with anchor businesses, Camp North End is also exploring with fun events to draw in a crowd like the North End Farmers’ Market and Fridays at Camp North End.

The Immersive Van Gogh, a traveling art show has wowed audiences from Los Angeles to Paris. Now it’s in Charlotte at Camp North End for a few months. It’s open through Sept. 12.

The great thing about Camp North End is the experience is always different. You want just a cool place to chill for a bit? It’s got that too with lots of lounging and green space weaved into the industrial vibe.

In the mood for a drink to unwind after a long week? Check. Mixologist Justin Hazelton at Leah and Louise gets rave reviews. There’s good beer to be found and even an Airstream bar on Fridays called Black Moth Bars.

The food options cover a little of everything. It’s a good place to experiment.

Since we are writing from a Real Estate perspective,  let’s talk about where you might actually live in the North End area.

Bright Walk Is an inspired neighborhood that has been developing since the mid-2020s.  This neighborhood has a diverse collection of housing.  Single Family Homes, townhomes, and condos.  It is so very close to uptown and across Statesville Rd.  From Camp North End.

This is a neighborhood of small homes built originally in ’60s and ’70s.  Things have definitely been happening in this neighborhood over the last 10 years.  The houses and lots in this neighborhood were a bargain at one time.  They have slowly been purchased and either renovated or torn down and built new.  Still a good investment and some great views of the city.

Oaklawn is across, well Oaklawn, from McCrorey Heights.  It also has a fantastic ever-changing landscape of houses and styles.

What’s your favorite Charlotte neighborhood to explore? We’d love to hear your recommendations.