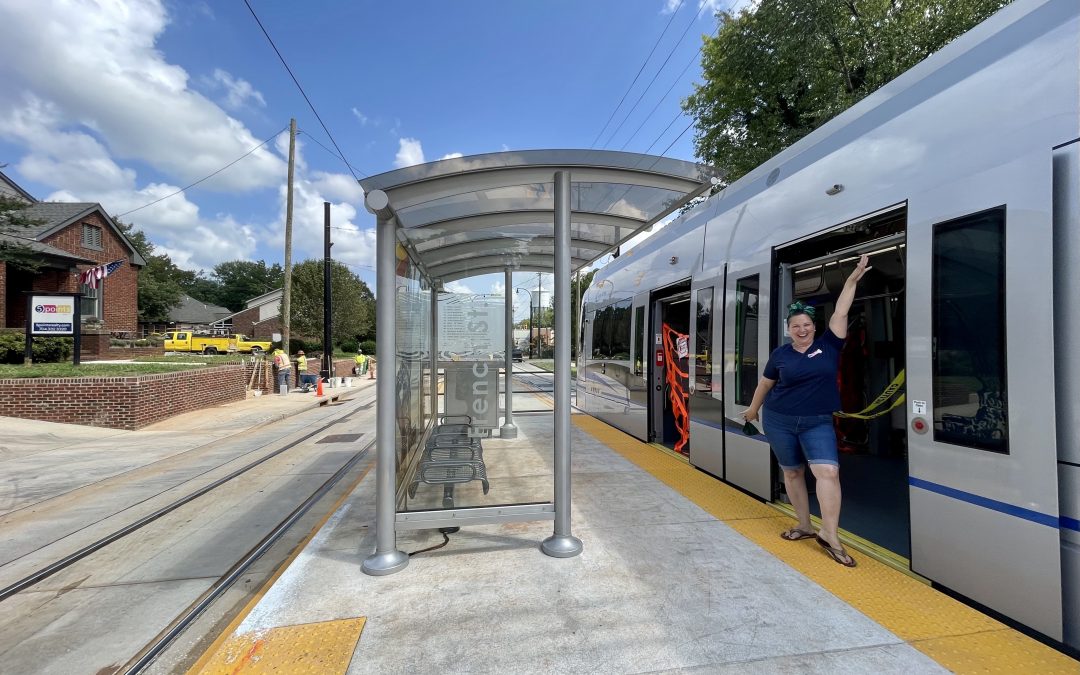 Charlotte Area Transit System began passenger service on its CityLynx Gold Line streetcar this week. The expanded streetcar line spans an additional 2.5 miles to run from Charlotte’s Historic West End to the Elizabeth neighborhood. It’s been a long time coming. 5 Points Co-Owner Michael Doney said, “ I sat in on my first neighborhood meeting in West End in 2001 after just becoming a resident of Wesley Heights.  We had a brief conversation about a new West Trade Street StreetCar and I thought how cool it would be to have a streetcar stop a few blocks away from my new house. ” Fast forward 20 years later and it’s hard to believe that the Gold Line is finally in operation.

On the west side, the line now continues beyond the Charlotte Transit Center, through uptown Charlotte, and along Trade Street into Historic West End. “The connections and future developments this streetcar line will bring are something everyone in the city should look forward to considering it runs through some of Charlotte’s most prominent and historic areas,” said Doney. 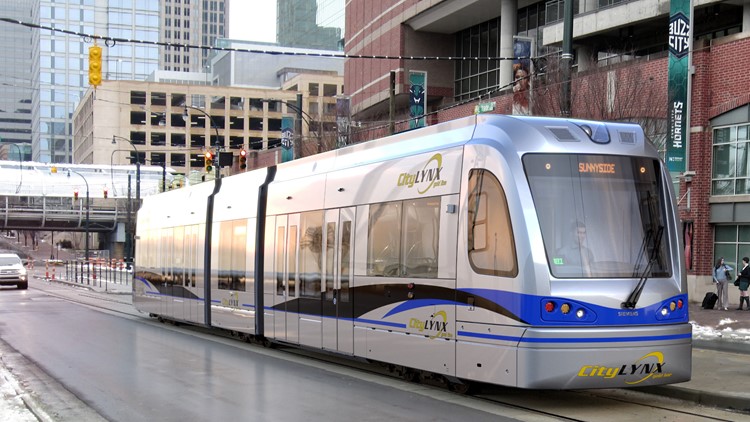 The streetcar will make getting to 5 Points Realty easier than ever before!

We’re on the West Side of town, in the shadow of Johnson C. Smith University, in an area known as the Biddleville neighborhood. Our office is in a sweet, bungalow-style, single-family home on Beattie’s Ford Rd.  When ownership purchased the home in the early 2000s they had no idea that our little perch would become a stop on the streetcar line.  We’re glad to see the construction toils of dust and noise, heavy machinery, blocked driveways, and unusable streets finally come to a close.  “For me, the streetcar means the world is opening up! Even as it closes down again,” says 5 Points Office Manager, Erica K. Vasile. “I love the fact that I can just pop on the streetcar and go downtown without driving. It feels like less isolation just because I can see all the people waiting outside and excited to take that little adventure.”

Doney admits, “I love the “ding-ding” and the rumble as these beautiful new streetcars slither past my office window.” Stop and say hello before you board!

You may not realize that Charlotte’s history with streetcars goes back to 1935. Original maps show the streetcar came right up our street!

The expansion continues the line east over the Independence Expressway and onto Central Avenue via the Hawthorne Lane Bridge which is finally open again too. That’s another spot that has seen multiple construction delays as part of the project.

5 Points Real Estate Agent Cassee Cunningham’s home is located on 8th and Lamar in the Elizabeth neighborhood, just a block from the Hawthorne corridor and the infamous Hawthorne Bridge.  Cassee shared her perspective on the opening.

Prior to the bridge closing, we could use Pecan Avenue or Hawthorne to drive, walk or bike to the other side of 74. With the bridge closed the only option was to squeeze all the traffic onto little ole Pecan. Our neighborhood streets became major thoroughfares for 3 years.  Patience amongst the neighbors wore thin as neighborhood streets were lined up and down with cars that would not normally be there.

In addition, our neighborhood businesses Hawthorne Pizza, Sabor, 7th St Deli, had to endure years of construction  and limited access to their businesses.”

Thank goodness the new Hawthorne bridge is finished so Cassee can finally walk again to get her favorite coffee.  Fortunately, everyone hung in there long enough to hear the welcome jingle of a running streetcar. All is right again in our part of the city.